The agrofood sector remains one of the most important sectors for North African economies. Although its contribution varies across the region, in 2014 it accounted for 9.5% of total gross added value in Tunisia, 12.7% in Algeria, 13% in Egypt and 15.6% in Morocco. In 2015, the sector provided employment to 21.7% of the total labour force in Egypt, 15% in Tunisia and approximately 40% in Morocco.

In general, some of the favourable factors boosting the sector include rising populations, increasing demand for processed food, higher per capita incomes and improved production capacities.

Nevertheless, local conditions and government strategies are major influencers on the specific challenges faced by each. In Morocco, the government has been making the development of the agricultural sector a priority since 2008, ensuring continued levels of investments. In Algeria, the government has recently begun promoting the importance of food self-sufficiency. Rising disposable incomes and changing consumer habits in Egypt have boosted domestic consumption for the agrofood sector.

In general, governmental strategies to support agriculture and the agrofood sector are mainly concerned with ensuring that food supplies meet demand a serious challenge, compounded by the region’s rapidly growing population and per capita income.

While progress has already been achieved, some challenges remain. The greatest of these difficulties is the relatively poor infrastructure, which drives up transport costs and thus narrows profit margins. In some areas, challenging topographies and difficult climatic conditions make the cultivation of many types of agricultural goods almost impossible. Depressed food prices in the region could also dissuade new investments in the sector.

In the case of Algeria, the persistence of low oil prices is a further factor contributing to risks, as the country is highly dependent on hydrocarbon revenues for providing subsidies and incentives to agrofood industries. This, in turn, is negatively impacting the sector’s ability o attract the investments it needs for development. 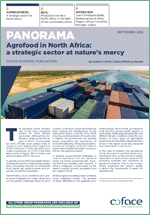