Argentina legislative elections: is the continuity of the pro-business direction at stake?

Since Mauricio Macri took office in mid-December 2015, the economy has started to recover. The exchange rate was liberalised during Macri’s first week in office, price controls were removed, import barriers were lifted, discredited national economic statistics were revamped, subsidies were reduced and the holdout saga was finally resolved in April 2016. The last of these measures allowed the country to regain access to the international financial market after a hiatus of 15 years. Coface subsequently upgraded Argentina’s country assessment to B1 in December 2016. The positive trend did however come, as expected, with short term side effects. Inflation picked up to 41 % in the end of the first year of government, reducing household purchasing power and leading the economy into recession (GDP -2.2 % in 2016). Social protests flourished in response.

The recovery could, however, be nipped in the bud by renewed political uncertainties against the backdrop of the legislative elections to be held on October 22 2017. The government is therefore in a rush to show that the economy is rebounding. This has taken longer than the ruling government expected, although activity is finally gaining strength (GDP + 1.6 % in the first half of 2017 on a yearly basis). A takeoff in the rebound will be subject to the outcome of the upcoming midterm elections. Linked to this, investors became more cautious on the country´s medium term political prospects, after former president Cristina Kirchner announced that she would run for the Senate in the province of Buenos Aires. The upcoming elections that will renew one third of Senate and half of the Lower House will be an indication of the potential outcome for the 2019 presidential race. If Kirchner succeeds in gaining a positive outcome, she may try to return to Casa Rosada, thus putting the continuity of the pro-business direction at stake. On the other hand, if the government´s coalition returns a good outcome, this would raise its political capital for passing reforms through Congress. 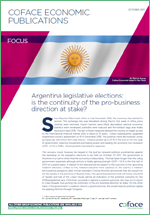 Télécharger la publication : Argentina legislative elections: is the continuity of the pro-business... (593,71 kB)