The luxury market is unique, mainly due to the fact that its products are consumed for social distinction. This has helped companies in the segment to outperform other sector-segments over the past years. Nevertheless, the luxury market is facing important challenges, notably regarding  counterfeit products, a risk for companies, and e-commerce, which is disrupting how business is conducted. In addition, the market is not immune to challenging economic conditions. Global economic activity is currently experiencing a slowdown: Coface forecasts a global GDP growth rate of 2.9% in 2019 after 3.2% in 2018, and this will have an impact on some luxury products. Looking ahead, the rise of emerging markets’ middle classes – especially in China – presents great opportunities. Despite global economic slowdown, we are therefore expecting the luxury retail market overall to be resilient, notably benefiting from the rise of Chinese consumers’ appetite for luxury.

How does the luxury market hold up during global recessions?

Luxury companies have outperformed other companies in the general market over the past years. Nevertheless, the luxury market is not immune to economic recessions: even those who can still afford luxury products may delay their spending during an economic crisis, as a method of self-restriction and/or a lack of confidence for the future. The resilience of luxury brands to recessions also depends on which demographic they are targeting: companies that try to attract a wider range of clients by including more accessible (and cheaper) products in their offer suffer more because they are in part relying on the middle class, who are generally more impacted by economic recessions.

Global economic activity is currently experiencing a slowdown, and a majority of regions worldwide are expected to be impacted (the Middle-East, whose importance on the luxury market is growing, is nonetheless expected to benefit from a sound economic growth). This occurs in a context of rising protectionism, notably with a trade war between the United States and China that has led to additional tarifs on luxury goods. A deterioration in most economic sectors is thus expected, particularly the pro-cyclical ones such as automotive, chemicals, and retail.

In 2018, luxury companies’ sales worldwide reached EUR 1.2 trillion, a 5% increase from 2017 according to Bain & Company (2018), mainly due to the rising of Chinese consumption of luxury. The major luxury markets are Europe, North and South America (mainly the United States) and Japan: they accounted for 87% of the global market in 2018. However, given that Chinese consumers accounted for 33% of global luxury purchases last year, it is likely that the luxury market will heavily rely on tourists from China to the United States and Europe and their consumption in 2019. On the global scale, the market is expected to be resilient despite the global economic slowdown. 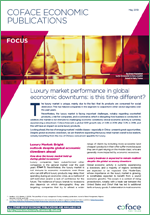