As was expected after Draghi’s resignation in July, a far-right coalition secured a comfortable victory (43% of the vote) in the September 2022 snap elections. The new government is led by Giorgia Meloni, whose Fratelli d’Italia (FdI) secured 26% of the vote. She is joined by Silvio Berlusconi’s Forza Italia (8% of the vote) and Matteo Salvini’s Lega (9%). Despite this authoritative electoral victory, Meloni will face significant challenges to remain durably in office. For one, the need to seek compromises with the European Commission and reassure investors may rapidly put her out of favour with anti-establishment voters. Second, due to policy and personal disagreements, Salvini is likely to defect if Meloni loses enough popular support. Meloni has signalled significant willingness to cooperate with the EU, but this will be tested as her popularity erodes. Italy needs to keep good relationships with the EU to be eligible for bond purchases under the ECB’s Transmission Protection Instrument (anti-fragmentation tool). While the tone set by the Meloni government has surprised on the upside, the main political risk in Italy remains the continued instability of the executive. The Meloni government has a high chance of collapsing before the end of its mandate. Italian populist parties tend to rise comfortably while in opposition only to quickly haemorrhage voters once they take office. Otherwise, tensions with other European governments are likely to emerge on topics like migration and the negotiation of new EU fiscal rules.

After negotiating key partnerships with Algeria and Azerbaijan, among others, Italy has strongly reduced its dependence on Russian gas to 10% of total gas imports (from a pre-war level of 40%). However, these diversified supply sources have been secured at very high prices. Hence, inflationary pressures have continued to intensify and should only moderate gradually in 2023. Italian companies are therefore facing increased cost pressures, lower margins, and increased uncertainty, all of which will take a toll on capital investment. With working capital needs becoming increasingly acute for businesses, corporate investment will slow down markedly. This is especially the case for key energy-intensive industries (paper, glass, construction, chemistry, ceramics, metal and machine-tool manufacturing). Similarly, the erosion of purchasing power is expected to have noticeable negative effects on consumption, which should contract in the first half of the year, then recover its pace as we head into 2024. Public investment, on the other hand, will remain resilient. Italy will still receive unprecedented fiscal support from the EU. Out of the EUR 750 billion of the NGEU fund, EUR 209 billion will be allotted to Italy (10.4% of 2019 GDP over 2021-2027) making it by far the single largest beneficiary in absolute terms. These funds are set to renovate the productive apparatus by funding the green transition, strengthen fiscal and digital infrastructures, as well as human capital and the social safety net. Tourism (13% of 2019 GDP) will continue to recover (albeit at a slower pace compared with 2022), but the unfavourable price effect in commodity imports will dominate and lead to a negative contribution of net exports. Owing to tight labour markets, the increase in unemployment should be limited compared with previous recessions.

Monetary normalisation will be a test for sovereign risk

Like other European nations strongly exposed to the energy crisis, Italy has deployed substantial deficit spending to shield consumers and businesses, whose cost (net of energy windfall taxes) is estimated at 3.1% of GDP. Concretely, most of the government’s intervention has come in the form of tax credits, gas VAT reduction (from 22% to 5%), and specific subsidies to the most vulnerable sectors and households. Meloni’s 2023 budget is based on a continuation of the Draghi government’s approach in that it seeks a resolute response to the energy crisis, while making efforts for fiscal consolidation. Out of the EUR 35 billion in new spending, EUR 21 billion is destined to support the energy bills of vulnerable households and firms. Conversely, the expensive citizen’s income scheme, the flagship measure of the weakened 5SM party, is set to be phased out gradually. The positive nominal GDP performance of 2022 and the inflationary boost to tax receipts will result in a continued reduction of the fiscal deficit. Nonetheless, the main source of fiscal risk could result from the ECB’s reaction to rising inflation. Indeed, rising policy rates, combined with the inflation premium and a rising concern among investors over government bonds, increased debt servicing costs from 3.5% of GDP in 2021 to 4% in 2022. Italy’s remarkably high public debt ratio makes it highly sensitive to increases in sovereign yields. Any excessive rise in sovereign spreads should nonetheless be contained by ECB bond buying, provided that the ruling government remains on good terms with the European Commission. Contingent liabilities of the state to the banking sector, estimated at around 15% of GDP also represent a risk. Deterioration in the energy balance and the contraction in exports will shift the current account into deficit. However, with external liabilities mostly in the form of Central Bank balances, external vulnerabilities are low.

Trade notes (cambiali) are available in the form of bills of exchange or promissory notes. Cambiali must be duly accepted by the drawee and stamped locally at 12/1000 of their value, being issued and payable in the country. When issued in the country and payable abroad, they are stamped at 9/1000, and finally stamped at 6/1000 in the country if stamped beforehand abroad, with a minimum value of €0.50. In case of default, they constitute de facto enforcement orders, as the courts automatically admit them as a writ of execution (ezecuzione forzata) against the debtor.

Signed bills of exchange are a reasonably secure means of payment, but are rarely used due to a high stamp duty, the somewhat lengthy cashing period, and the drawee’s fear of damage to his reputation caused by the recording and publication of contested unpaid bills at the Chambers of Commerce.

In addition to the date and place of issue, cheques established in amounts exceeding €1,000 and intended to circulate abroad must bear the endorsement non trasferibile (not transferable), as they can only be cashed by the beneficiary. To make the use of cheques more secure and efficient, any bank or postal cheque issued without authorisation or with insufficient funds will subject the cheque drawer to administrative penalties and listing by the CAI (Centrale d’Allarme Interbancaria), which automatically results in exclusion from the payment system for at least six months.

Bank vouchers (ricevuta bancaria) are not a means of payment, but merely a notice of bank domicile drawn up by creditors and submitted to their own bank for presentation to the debtor’s bank for the purposes of payment (the vouchers are also available in electronic form, in which case they are known as RI.BA elettronica).

Bank transfers are widely used (90% of payments from Italy), particularly SWIFT transfers, as they considerably reduce the length of the processing period. Bank transfers are a cheap and secure means of payment once the contracting parties have established mutual trust.

Amicable collection is always preferable to legal action. Postal demands and telephone dunning are quite effective. On-site visits, which provide an opportunity to restore dialogue between supplier and customer with a view to reaching a settlement, can only be conducted once a specific licence has been granted.

Settlement negotiations focus on payment of the principal, plus any contractual default interest as may be provided for in writing and accepted by the buyer.

When an agreement is not reached, the rate applicable to commercial agreements is the six-monthly rate set by the Ministry of Economic Affairs and Finance by reference to the European Central Bank’s refinancing rate, raised by eight percentage points.

When creditors fail to reach an agreement with their debtors, the type of legal action taken depends on the type of documents justifying the claim.

Based on cambiali (bills of exchange, promissory notes) or cheques, creditors may proceed directly with forced execution, beginning with a demand for payment (atto di precetto) served by a bailiff, preliminary to attachment of the debtor’s moveable and immoveable property (barring receipt of actual payment within the allotted timeframe). The resulting auction proceeds are used to discharge outstanding claims.

Creditors can obtain an injunction to pay (decreto ingiuntivo) if they can produce, in addition to copies of invoices, written proof of the claim’s existence by whatever means or a notarized statement of account. A forty-day period is granted to the defendant to lodge an objection.

Ordinary summary proceedings (procedimento sommario di cognizione), introduced in 2009, are used for uncomplicated disputes which can be settled upon simple presentation of evidence. Sitting with a single judge, the court determines a hearing for appearance of the parties, and delivers a provisionally executory ruling if it acknowledges the merits of the claim; the debtor however has 30 days to lodge an appeal.

The creditor must file a claim with the court (citazione) and serve summons to the debtor, who will file a defence (comparsa di constituzione e risposta) within ninety days via a preliminary hearing. The parties then provide briefs and evidence to the court. When the debtor fails to bring a defence, the creditor is entitled to request a default judgment. The court will usually grant remedies in the form of declaratory judgments, constitutive judgments, specific performance and compensatory damages but it cannot award any damages which have not been requested by the parties.

Undisputed claims are typically settled within four months, but the timescale to obtain an enforceable court order depends on the court. Overall, disputed legal proceedings take up to three years on average.

The current civil procedure code is intended to speed up the pace of proceedings by reducing the procedural terms, imposing strict time limits on the parties for submitting evidence and making their cases, and introducing written depositions in addition to oral depositions.

Enforcement of a legal decision

A judgment becomes enforceable when all appeal venues have been exhausted. If the debtor fails to comply with a judgement, the court can order compulsory measures, such as an attachment of the debtor’s assets or allowing the payment of the debt to be obtained from a third party (garnishee order) – although obtaining payment of a debt via the latter option tends to be more cost-effective.

For foreign awards, decisions rendered from a country in the EU will benefit from special procedures such as the EU Payment Order or the European Enforcement Order. Judgment from a non-EU country will have to be recognized and enforced on a reciprocity basis, meaning that the issuing country must be part of a bilateral or multilateral agreement with Italy.

The 2012 legal reform allows a debtor to file an application for composition by anticipation. Negotiation on an agreement commences 60 to 120 days prior to the initiation of judicial debt restructuration proceedings. The debtor retains control over the company’s assets and activities. A new pre-agreed composition plan may be agreed with the approval of creditors representing 60% of the debtor company’s debt.

This settlement is a court procedure which allows a company in financial difficulty to propose a debt restructuration plan. The debtor files a proposal to the court to repay the total amount outstanding to the secured creditors. If the court admits it, a commissioner trustee is appointed, and if the majority of the unpaid creditors accept the proposal, the court will officially validate the proceedings.

Alternatively, a debt restructuring agreement (accordi di ristrutturazione del debito) aims to restructuring the debt so as to rescue the debtor company from bankruptcy proceedings. The debtor must file a report on its ability to pay the remaining creditors in full, who otherwise can challenge the agreement before a bankruptcy court by requiring verification that their claims will be paid as normal.

This procedure aims to pay out the creditors by realising the debtor’s assets and distributing the proceeds to them. The status of insolvency justifies the adjudication of bankruptcy by the court, even where the insolvency is not due to the debtor’s misconduct. The court hears the evidences of the creditors’ claims and appoints a receiver to control the company and its assets. This receiver must liquidate all of the company’s assets and distribute the proceeds to the creditors to have the proceedings formally concluded. 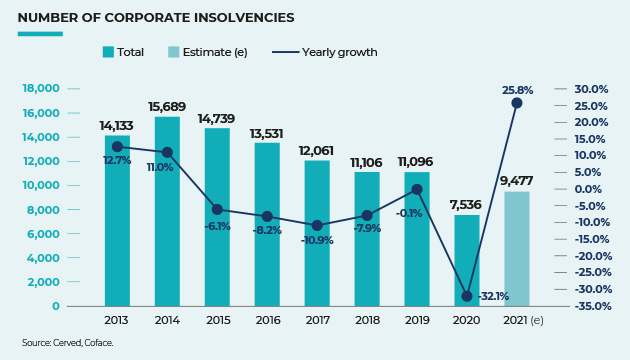