In Coface’s view, the world economy is presently marked by divergence between the three major advanced zones: the economic contraction in the euro zone is worsening (-0.3% currently forecast in 2012 versus -0.1% previously), whereas North American growth is stabilizing at 2%, and activity is recovering in Japan, with 1.8% growth after posting -0.9% in 2011.

American and Japanese companies are benefitting from their favourable economic outlook

Signs of economic recovery have led Coface to place the A2 assessment of the United States under positive watch and to remove the negative watch on Japan’s A1 assessment.

The confidence and consumption of American households are picking up, despite rising petrol prices and the stagnation of disposable income. The improvement in the labour market now involves a significant number of states, but the pace remains insufficient to rapidly decrease unemployment. Generally, corporate debt levels are very low and companies are highly profitable. In 2011, corporate investment increased. However, American SMEs remain fragile due to their difficulties in obtaining credit. Coface notes a good performance in its payment experience with American companies.

After the abrupt downturn following the catastrophic events of March 2011, the Japanese economy is expected to recover, driven by domestic demand and stronger exports. Exports, the traditional engine for Japanese growth, will benefit from the recovery in US economic activity and from the vitality of emerging Asian countries. Even in an environment of economic contraction, the payment behaviour of Japanese companies has remained positive.

The economic contraction in the euro zone is worsening, particularly in Italy, Spain and Portugal.

The growth forecasts for 2012 for Italy and Spain have been revised to -1.5% and -1.2%, respectively. In January 2012, Coface downgraded these two major euro zone economies to A4 and its payment experience with these countries continues to deteriorate in early 2012.

At the same time, Coface observes a marked deterioration in the financial situation of Portuguese companies. The country’s recession is likely to deepen even further in 2012 (-4%). Downgraded to A4 in March 2011, then placed under negative watch in September 2011, Portugal has now been lowered by one notch to B. Despite receiving European assistance, the solvency of the State continues to worsen and the period of austerity measures has been extended in the event of an expected downturn in European demand. The situation of Portuguese companies, like those in Spain, is characterized by an explosion of external debt, currently in excess of 180% of GDP, which explains their extreme vulnerability to negative economic developments. Since 2011, Coface has registered a surge in non-payments, in particular in the construction, distribution and textile sectors.

In Australia and New Zealand, despite strong growth, the manufacturing sectors are in trouble

Despite the solid growth expected in 2012, +2.8% for Australia and +3.2% for New Zealand, the A1 assessments of these two countries are now placed under negative watch. Driven by the mining sector, this growth veils the difficulties of the manufacturing and tourism sectors, which are more sensitive to the price-competitiveness mix. With the exception of the mining sector, companies are experiencing difficulties in obtaining credit, resulting in longer payment periods. Over half of recently surveyed Australian companies indicated that payment periods granted to their clients have grown by more than 60 days. In February 2012, on a six-month sliding scale, business bankruptcies increased by 17% in Australia and by 109% in New Zealand.

In Argentina, the government’s restrictive measures put an end to the risk improvement noted in 2011

Coface has removed the positive watch on Argentina’s C assessment as a result of the worsening business situation in early 2012. Coface notes payment delays following the establishment of currency exchange and import control measures, against a backdrop of deteriorating public and external accounts. In emerging countries, protectionist tendencies, which are especially strong in Latin America, have become a key factor in corporate credit risk. Despite an often positive economic trend, the access to foreign currency for importers may sometimes, and in an unpredictable manner, become more difficult due to a certain regulatory decisions. 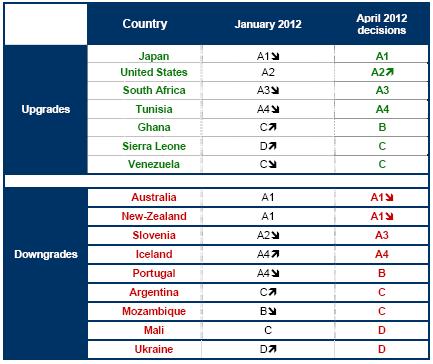 Warning : Coface country risk assessment measures the average level of payment defaults by companies in a given country within the framework of their commercial transactions. It does not pertain to sovereign debt. To determine country risk, Coface combines the economic, financial and political outlook of the country, Coface’s payment experience and business climate assessment.
Assessments have a seven-level scale: A1, A2, A3, A4, B, C and D.