More than three years after the official recovery, advanced economies are struggling to return to a path of sustained growth. Some are even forecasting stagnant growth, a situation sometimes seen as irreversible. But not all advanced economies are in the same position when it comes to this risk of long-term stagnation and some exceptions stand out in what is a fragile global landscape. Which of the OECD’s advanced economies have what it takes to accelerate their growth over the next decade?

Traditional indicators vs. decisive criteria revealed by the recent crisis

To identify those advanced economies at the least risk of entering a prolonged period of low growth or even stagnation, Coface economists analysed a sample of 23 countries based on five criteria: 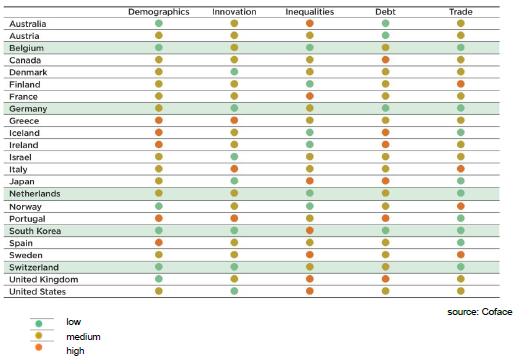 Research and development expenditure, supported mainly by private German companies, is higher than the OECD average. Funding systems encourage small companies to grow. Finally, in addition to a sustained pace of exports, the country enjoys a high level of competitiveness, excluding cost.

A leader in high-quality electronics, South Korea is achieving significant productivity gains by building on its strong innovation capacity, including a high-quality education system, a high level of public expenditure on research and development and a large number of filed patents. Despite the slowdown in China, its cutting-edge innovative technology ensures it retains economic potential in terms of exports.

Innovation is a key priority for Switzerland, which has adopted a strong position in biotechnologies. Its financing system encourages access to bank loans for SMEs and its sources of research and development funding are mainly private. It also has very high non-cost competitiveness excluding cost, with Swiss companies enjoying a high-end brand image. Swiss exports increased by 27% between 2007 and 2013.

Belgium is one of the countries with the lowest levels of inequality in the OECD. The country also has one of the highest degrees of openness in the OECD, at 82% of GDP. This dynamic external trade makes the country particularly competitive.

The Netherlands enjoys well-balanced and relatively positive indicators. Although the country's total debt is fairly high (355% of GDP), the level of public debt (78%) could allow the government to support the private sector in the event of an expected change in growth. Port activity is also a particular advantage for the country, with Rotterdam being Europe's largest port. Again, the country enjoys one of the highest openness rates in the OECD (83% of GDP). 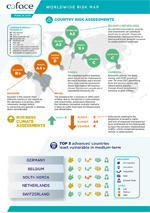 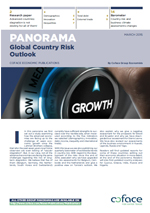