In 2012 Coface improved its results despite the crisis

"In 2012, Coface achieved good results: we succeeded in combining profitability and growth in thedifficult context of aEuropestill in crisis. Our claims and costs are under control. The support offered to our customers has been the driver of our commercial activity. We continue to make their exchanges safer through innovative solutions", commented Jean-Marc Pillu, Chief Executive Officer of Coface.

In an economic downturn, particularly in the eurozone, Coface continued to increase its turnover, which totalled €1,571 million (+1.4%). Premiums rose by 3.1% due to strong sales momentum despite the weak growth in customer activity.

In particular, the emerging markets contributed to this performance: Asia Pacific (+20.1%) andLatin America(+18.5%), areas where Coface is the market leader.

In theUnited States, premiums displayed significant growth (+14.2%). The increase in premiums in Western Europe (+2.4%) and inCentral Europe(+14.9%) remained positive, despite the sharp deterioration in the economic situation in these regions. Only Northern Europe posted a drop (-11.8% and -2.5% excluding non-recurring adjustments): activity inGermanywas constrained by the deliberate temporary reduction policy in factoring as part of its financial autonomy programme. 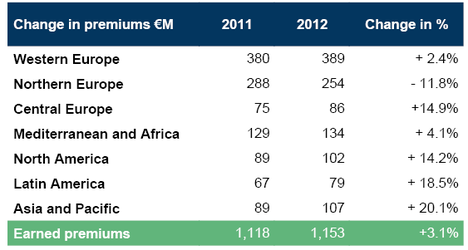 The net combined ratio of reinsurance improved to 82.2%, compared to 82.7% in 2011. This improvement reflects a fall in both the loss ratio and cost ratio.

In 2012, the loss ratio was controlled at 56.6% compared to 56.9% in 2011. Coface has strengthened the local presence of its underwriters and teams dedicated to the production of enhanced information, closer to the clients and their debtors. Despite a difficult environment for companies, this policy has enabled risks to be finely managed, while still supporting customers: insured receivables are up 3.5% since the turnaround in the economic cycle mid-2011.

In 2013, Coface does not expect any improvement in the economic situation, particularly inEurope, even if emerging markets display strong vitality. This will mean more strain and fewer opportunities for corporates. In this context, Coface's mission, expressed in its new tagline "Coface for safer trade", will stay more relevant than ever. It will be conducted with the constant concern to support companies in their development and to secure their trade, thanks to refined and joint risk management.

Two innovative offers launched recently will contribute to this aim:

Download this press release : In 2012 Coface improved its results despite the crisis (56.34 kB)