April 1st 2015 marked the end of milk quotas in Europe, a regulatory tool imposed in 1984 in response to overproduction, leading to the so-called “butter mountain” and the “milk lake”. For the first time in 30 years, the market alone will determine the quantities of milk produced. Are French dairy farmers ready for this? Is the abolition of milk quotas going to make it possible for milk producers to supply the rapidly growing markets in Asia? Or to develop to meet the high level of demand for organic products?

Dominant position of the European Union

Driven by growth in the emerging economies, world output has increased by 56% over the last thirty years. Within the European Union, at the same time as consumption fell by 2% between 2008 and 2013, the sector was sustained by the vitality of its exports. Germany is Europe’s leading producer with 22% of total output, followed by France (17%) and the United Kingdom (10%).

In terms of world production, France is also among the leaders, in 8th place. Over the last thirty years, the sector has been through series of rationalisations, resulting in a decline in the number of farms and a rapid improvement in productivity. In addition, whilst in 1983 the farms were spread throughout France, the rationalisations have led to greater geographic concentration. In 2013, milk production in western France accounted for 6.8% of all European Union production.

Low level of insolvencies, but a sector undermined by price and cost volatility

In France, business insolvencies in the dairy sector were marked by a higher proportion of dairy cattle farms. However, this effect was mitigated by the aid paid to most of these operations. Businesses in the sector have a much lower rate of insolvency than the average for French businesses, i.e. 0.38% against 2.54%.

The sector is however highly exposed to the volatility of prices and costs, which are the main areas of uncertainty in terms of managing a dairy farm. It is also characterised by production models that are different from those in other European countries. The hill farms and mixed and livestock farming operations are more sensitive to variations in prices and costs than farmers on flat prime agricultural land. None of these models, however, guarantees a sufficient level of profitability without the payment of external aid. This is why any likelihood of a fall in prices is so feared by farmers. 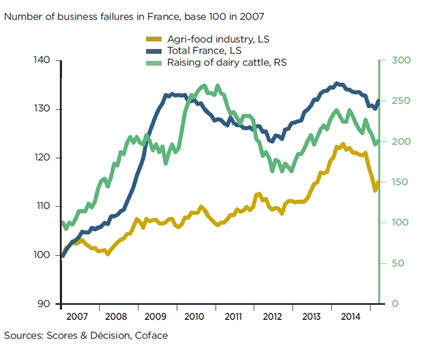 Existing strategies and there future development

Firstly, the possibility of an export drive to conquer new markets will benefit France. The country is well positioned internationally and has a positive trade balance and a reputation for high quality products. There is within the emerging economies, and in particular in Asia, a growing desire among consumers for dairy products. In addition, dairy products have a high income-elasticity: a moderate increase in income results in a strong increase in demand.

Secondly, the vertical integration of the production / transformation / distribution process will help operators to maintain their margins. France has considerable room for manoeuvre in terms of direct sales as these currently accounts for just 3.3% of total sales.

Finally, whilst the proportion of certified organic land in France is low (compared to that of its competitors), it has been on the rise since 2005. It has taken French farmers longer to move into this segment. However, the number of dairy cattle certified organic has doubled in the last ten years. This trend is a positive sign as there are growing numbers of French consumers prepared to pay more to eat healthier. 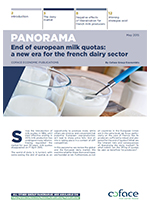 
End of european milk quotas: a new era for the french dairy sector