Early 2020 marked by a sudden interruption in world trade, hampered by a global recession and soaring uncertainty

The global recession is expected to coincide with a sharp decline in international trade this year, especially as international trade tends to decline more than GDP in times of crisis. However, the extent of this overreaction is difficult to measure. The World Trade Organization (WTO) forecasts a 13-32% decline in world trade. This estimate indicates that all regions would suffer a double-digit decline in their trade volumes. According to Coface's forecasting model – which uses oil prices, business confidence in the US manufacturing sector, South Korean exports, and the Baltic Dry Index as explanatory variables for global trade –  world trade is expected to decline by 7% in the third quarter of 2020 compared to the previous year. However, the outcome could be significantly worse as the usual correlation measured through linear models does not necessarily work in times of crisis. During periods of negative economic conditions, a sharp increase in uncertainty is one of the reasons for the overreaction of trade to GDP – today, however, this overreaction is at an all-time high.

Protectionism is another aggravating factor. Since the beginning of the global health crisis, trade protectionism seems to have focused on ensuring countries’ supplies supply of food and essential medical product. As of April 22, 2020, 56% of the trade measures registered by Global Trade Alert (193) were related to the abovementioned objective. Most measures (110) concerned export bans on masks and other protective equipment, respirators, and chemicals required in the production of various drugs.

In this period, importers are facilitating the entry of medical products, while exporters are making it harder to export them. In this context, the case of China is peculiar: although their medical exports decreased by 15% in February 2020, in the midst of a local health crisis, their dominant market share (55.3%) of global mask exports meant that China's cooperation has been essential in supplying the world. China's daily production has jumped to 116 million masks, 12 times the amount it produced before the epidemic.

The crisis has also led to increased protectionism in the agri-food sector. The waves of panic buying triggered by lockdown prospects have not been limited to households: some vulnerable countries are looking to stockpile grain to ensure the continuity of their national food supply. Today, a third of the market’s wheat supply is under cautious restrictive measures by its major exporters, with Russia leading the pack. At this stage, the export bans have mostly resulted in demand shifting to European countries, such as France, rather than supply shortages.

In addition to wheat, rice is another highly sought-after commodity in this unique period. In India, the world’s main rice exporter, deliveries can no longer be ensured: lockdown measures have disrupted domestic supply chains, reduced labour availability, and made access to exporting ports difficult. Although Thailand, India's main competitor, has ample stocks of rice, its exports are hampered by lockdown measures in Cambodia, which are depriving the sector of the much-needed seasonal workers. Consequently, the price of rice reached a 7-year high at the end of March.

The only good news is that border controls implemented during the lockdown have had a limited impact on trade. They are now being eased gradually in Europe, in order to revive the tourism industry and limit labour shortages, particularly in the agricultural sector.

In the longer term, calls for the relocation of production stages in the same country constitute another risk for world trade. At the first stage of the crisis in China, companies around the world realized how exposed their supply chains were to the country and are now looking at increasing supply chain resilience to foreign supply shocks. This could come via two means: full relocation of production to the domestic market, or a strong global strategy of supplier diversification.

In the current context, imagining a full relocation of manufacturing processes at the domestic or regional level highlights issues of rising production costs and lack of domestic skills. Even if these two issues are addressed, any new localized production processes would still depend on raw material supply, which cannot be relocated.

The resilience of supply chains will also require reducing country-specific exposure by diversifying suppliers. At first glance, it currently seems possible to find alternatives to the top largest supplier country; China in most sectors. But since major input producers in an industry are strongly interconnected, dependence on China will not disappear radically, even if input supply to the other major hubs in the sector is more diversified.

This means that global value chains still have a bright future. 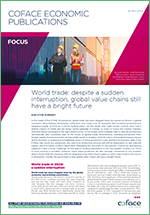