Central Asia: is the ménage à trois with China and Russia sustainable?

Central Asia is both a partner and a trade gateway for China and Europe. It is located on two branches of the New Silk Road. Despite criticism, China is the most involved in the development of Central Asian corridors. This deployment is not obvious given the competition from other routes and poor regional cooperation. While Russian influence remains significant through expatriate remittances, its military bases, and culture, it is being supplanted by China in economic matters.

The region’s countries’ foreign trade in goods accounts for a significant share of their gross domestic product: 57% and 42% respectively for the main economies of Kazakhstan and Uzbekistan, but up to 85% and 60% respectively for the smaller ones of Kyrgyzstan and Tajikistan. The main exports are hydrocarbons, gold, silver, copper and other minerals, steel, aluminium, cotton and cereals. They purchase capital goods, vehicles, petroleum products, steel, medication, and polymers.

The main partners of the region (Chart 1) are the European Economic Area (25% of the region’s trade), China (21%) and Russia (18%). Turkey, Kazakhstan, South Korea, and the United States also rank high among the partners. As a result, and because of their isolation, the interest of the countries of the region in the Silk Roads and its projects does exist. But there is also interest from their partners, particularly from Europe and China. For them, beyond their trade with the region, their bilateral trade can benefit from the implementation of new projects under the Chinese Belt & Road Initiative.

The Belt and Road initiative (B&R), launched by Chinese President Xi Jinping in Kazakhstan in 2013, aims to promote the development of a network of connectivity and cooperation between China and Western Eurasia through loans and direct investment. This should notably enable it to secure its energy and raw material supplies, and develop new, faster and cheaper routes for its main export and import flows. At the same time, it should also promote the development and stability of the regions covered, counter the development of radical Islamism and its expansion on its territory, and find outlets for construction activity with overcapacity on its domestic market. China is the largest provider of funding, with the World Bank and financial institutions in partner countries providing few resources in this context. Private financing may also be used. At the beginning of 2019, the initiative involved 130 countries representing 41% of world GDP and 49% of trade. 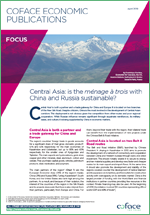 Download this publication : Central Asia: is the ménage à trois with China and Russia sustainabl... (689.59 kB)