Up until 2014, Latin America’s exports were boosted by China’s vast appetite for raw materials and the hike in their international prices. The region´s abundant natural resources brought economic gains during the commodity bonanza period and it became a major supplier of basic products, particularly to China. However, this trend resulted in appreciation pressures on exchange rates in many countries in the region. As a consequence, the manufacturing sector became much more exposed to international competition than the primary sector. Local output was thus set aside, in favour of imports, to meet rising domestic demand. Countries in Latin America seemed unable to compete with low-income countries for the production of unsophisticated goods, or with advanced countries for high value products and technological services.

This panorama analyzes the performance of Latin American manufacturing exports from 1995 to 2015 and examines why they remain lackluster, despite the strong deterioration in exchange rates seen since mid-2014. We have studied data on the six main countries (Brazil, Mexico, Argentina, Chile, Peru and Colombia) which together represented over 90% of Latam´s total manufacturing exports in 2015. The most recent decline in commodity prices was followed by significant depreciations in the main Latin American currencies. The Brazilian real, the Argentinean, Chilean and Colombian pesos and the Peruvian Nuevo Soles, have all depreciated in nominal terms. This should have been a great contributor to boosting manufacturing exports, as it reduced prices and increased competitiveness. Despite this advantage, countries have failed to report rebounds in revenues from foreign sales. This suggests that the influence of the evolution in exchange rates on manufacturing exports in Latin America is somewhat limited.

The second section of this report examines other factors (besides the lack of dynamism in global growth, which has led to weaker foreign demand) that might have influenced the weak performance of manufacturing exports. These additional factors that could be hindering competitiveness include high labour costs, poor quality of infrastructures and the insufficient number of trade agreements. Overall, countries failed to take the advantage of the past commodity bonanza, to implement the reforms they needed. Serious challenges now remain, but government revenues have shrunk. There are big issues looming ahead for manufacturing exports as: (i) price competitiveness will not make important gains, due to appreciations in exchange rates and no reductions in labour costs; (ii) global activity is not expected to report vigorous growth in the near future, so demand for manufacturing products will be limited; (ii) overcoming bottlenecks in infrastructures will be complicated, in the light of corruption scandals and in the absence of a well-defined regulatory framework; (iv) protectionism is increasing globally and the development of trade agreements with important trade zones seems unlikely.

In summary, as manufacturing exports are not expected to show a rebound, trade is unlikely to be a main contributor to the growth of Latin America economies over the coming years. Growth in the region is therefore expected to remain sluggish and Coface forecasts that GDP will contract by 0.5% in 2016, followed by a marginal rebound of 1.2% in 2017. 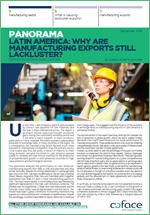