Central and Eastern Europe: Political risks on the rise but no impact yet on local businesses

With the wave of ongoing elections in countries such as Hungary, Czech Republic, Poland and Slovenia, Central and Eastern Europe is undergoing a major period of change against the background of economic growth that is still strong. Coface’s political risk index illustrates a diverse picture throughout the region. While social risks are low, due to the favourable macroeconomic situation which is triggering an improvement in household sentiment additionally supported by government measures, the rising trend of populism and concerns over the EU are increasing the global level of political risks.

In general, risk is significantly lower in Central and Eastern European countries (CEE) than in the past. The region is enjoying economic activity which has gained momentum in recent years. Socio-economic indicators used to measure the degree of social frustration have improved. GDP per capita has increased and is now closer to the Western Europe average, unemployment rates have contracted significantly and inflation remains moderate.

Countries in the CEE region are showing different forms and stages of political risk. Hungary and Poland are mentioned the most often, with the EU and international institutions showing concerns on respecting the rule of law. The proposed changes to law and the judicial system in Romania are considered as having negative impacts on the efficiency of measures to combate corruption. In the Czech Republic, where the ANO party won the latest elections in October 2017, its leader Andrej Babis, appears to be following a similar path to those of the governing parties in Hungary and Poland. Although it has not yet happened, the Czech Republic is being faced with political turmoil since the no-confidence vote in January this year. The Prime Minister is trying to form a new coalition government, with support from parliament. Both Slovakia and Slovenia recently experienced resignations of their prime ministers.

The polarisation of society in the CEE is witnessed by the number of civilian demonstrations. “Various changes affecting the situation of inhabitants and the political landscape have led to a number of demonstrations across these countries”, analyses Grzegorz Sielewicz, Regional Economist Central & Eastern Europe and author of the study “The singularity of political risk in Central and Eastern Europe”. “Corruption issues which contribute to social dissatisfaction continue to play a role in the CEE region´s political risks, despite countries adopting EU standards and making major improvements in this field, such as setting up anti-bribery watchdogs in many countries. Bulgaria, Hungary and Romania remain last among EU countries in the corruption rankings.”

What will be the outcome of tensions with the European Union?

Thus far, politics and the conflicts of some countries with the EU have not caused serious consequences for businesses. However, this situation is mainly due to other factors which are supporting CEE economies and businesses operating in the region. Economic activity has accelerated and in 2017 soared to its highest level in eight years (4.5%). It remains solid in 2018, at 3.9%. Strong contributions are being seen from household consumption, rebounding investments and projects that have been partly co-financed in the EU budget. Exporters are benefiting from the upswing in global demand, especially on the main foreign markets, as well as from price and quality competitiveness. The two latter factors, along with the CEE’s geographical proximity to Western Europe, are continuing to attract foreign companies to invest in the region.

Despite this, if there were to be a further deterioration in terms of political risks, it could make foreign entities reluctant to remain in CEE countries - especially if changes could hurt them directly. Although these governments do not want to lose these significant contributors to their domestic economies, tougher relations with the EU and possible financial consequences could be a trigger. It is still likely that the current UE-CEE tensions will end in a compromise, as both parties have too much to lose if relations worsen.

---
The Coface political risk index, originally launched in 2017, takes the major risks into account: the security risk (conflicts and terrorism) and political and social fragility. While the first directly prevents companies from carrying out their activities, the second has a more indirect effect, due its negative influence on confidence. 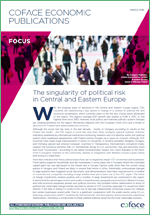 Download this press release : Central and Eastern Europe: Political risks on the rise but no impact ... (143.72 kB)


The singularity of political risk in Central and Eastern Europe