Has the US automotive sector shifted safely into top gear?

A recovery sustained by domestic consumption, and recently, increased investment

Following a 35% collapse when the crisis hit, car sales in the United States in 2014 were back at the levels they were at in 2007. The recent fall in oil prices (-48% in 2014) undoubtedly contributed to this. But the recovery of this sector so severely damaged in the crisis, is also being driven by two key factors.

The first is that the recovery in the US economy has meant households have been able to benefit from very low interest rates: the ease of access to credit has bolstered their purchasing power and enabled them to replace their vehicles. This improvement in living standards is also being driven by wages rising faster than prices. With the fall in the level of unemployment, companies are increasing their skilled workers’ pay. All of this is helping boost the level of confidence American households have in the economy.

The second factor is the positive economic situation which is encouraging companies in the sector to relocate production in the country. Investments in increasing automation in the production process reduce the correlation between labour costs and location. As a result, with a few exceptions, all the world’s leading automobile and automobile equipment manufacturers are now located in the United States. National and State authorities have provided strong support for the sector, by holding down policy interest rates and implementing supporting policies: “scrappage programs” and financial support for two major US automakers (the injection of almost 80 billion dollars into GM and Chrysler).

Disenchantment with the car?

The fall in unemployment, however, has tended to bypass the younger generation. “Millennials[1]” are not fully integrated into this virtuous cycle and are prolonging their years in education in an attempt to maximise their chances of gaining employment. One result of this is that they have high debt levels due to student loans: they either delay their purchase of a vehicle, or become high-risk borrowers. In addition, they seem to attach less importance to vehicle ownership, making increased use of alternative forms of transport, a surprising fact in the country where the car is king. In the 20 - 29 age group, the number of those with driving licenses fell by 9% between 1995 and 2010, a sign of a certain disenchantment with the car.

There is also a downside to the increasing ease of access to low interest rate credit: banks are granting more credit to those in the “subprime” categories, with the aim of increasing the profitability of their outstanding loans. These include so-called “high risk” households, and the numbers of payment defaults have increased significantly and will continue to rise in 2015.

Another possible source of tension is that the FED could very well raise interest rates this year. This would add to the pressures on households with high debt and variable rate loans, and possibly force them to dispose rapidly of their vehicles.

An industry focused on change

Manufacturers need to adapt their supply and define a model for this changing demand. The strength of R&D investment will be critical in a supply-led sector, such as automotive, where new models play a direct role in driving sales, by stimulating consumer aspirations.

INFOGRAPHICS : THE US AUTOMOTIVE SECTOR 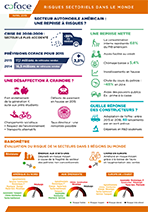 Download this press release : Has the US automotive sector shifted safely into top gear? (150.11 kB)


Barometer sector risks in the world