Polish insolvencies stop rising - but for how long?

Polish insolvencies stop rising - but for how long?

The insolvency statistics for Polish companies reflect an improvement during the first half of 2014. In total 402 companies declared bankruptcy, representing a decrease of 11.5% compared to the same period in 2013. A detailed look into the sectors shows a mixed picture, with a highly competitive retail sector and the construction business, a long term negative performer, finally showing good results. The outlook for the end of 2014 is clouded. External turbulence and weak domestic consumption are expected to fuel a higher risk of company insolvencies in Poland.

The last few months of 2013 and the first quarter of 2014 brought not only an increase in domestic consumption of daily necessities (stimulated by an improvement in the labour market), but also a better outlook for Poland’s main export markets. This can be seen as a result of the recovery, however slow, in the Eurozone. Nevertheless, the second quarter of this year has already showed that the rate of economic recovery in the Eurozone has weakened. In Germany, one of Poland’s main trading partners, GDP contracted by 0.2% q/q. Added to this, Russia, another important market for Poland, is suffering from a slowdown. This is amplified by the political risk related to the Russia-Ukraine conflict and by the embargo implemented by the Russian government on agro-food products.

The insolvency statistics for the first half of 2014 show that Polish companies are resisting the deterioration in their main export markets. However, the experience of Coface shows that insolvencies usually follow the macroeconomic situation with a lag of one or two quarters. As a result, today’s statistics largely reflect the state of soundness of companies as at the end of 2013/beginning of 2014. During this period, domestic demand was growing to become the economy’s main driving force, while the level of risk on export markets was relatively low.

The number of insolvencies in the construction sector, a long-time negative performer, ceased growing and declined by 21% in the first half of 2014 (compared to the first half of 2013). However, it should be noted that the number of companies operating in the construction sector is smaller than in previous years, which is partially related to the high number of corporate insolvencies in the past.

The number of insolvencies in the retail sector increased by 27%. The ongoing process of consolidation in the sector is characterised by intense competition and pressure on margins. Despite the improvement in the labour market, consumers are still highly cautious when making purchasing decisions. The weak demand for durables is evidenced by one of the largest bankruptcies this year: Domex, owner of Avans stores.

The number of insolvencies amongst transport companies during the first half of 2014 remains at the same level as in the first half of 2013. This trend may soon change, for two main reasons. The current disruptions in foreign trade may result in an increase in insolvencies over the coming quarters. Furthermore, strong competition in this sector is forcing companies to accept lower margins, while they still need to bear fixed operating costs.

What impact will external turbulence have on the number of insolvencies in Poland in the future?

The current situation in foreign markets is generating a number of risks for the Polish economy. Polish exports are constrained by a slowdown in the Russian economy, as well as by a disappointing recovery in the Eurozone. The latter generates even more risk, as 53% of Poland’s exports are to the Eurozone, with Germany representing 26% of total exports. Coface forecasts that the Eurozone will grow by 0.9% this year, whereas Russia will stagnate (0%) in 2014.

According to Coface, the most likely scenario of external impact on Polish insolvencies would be a rise of 8%, due to the stagnation of Poland’s crucial exports markets. In addition to this, if tensions between the EU and Russia escalate and/or the Eurozone slowdown deepens, the effect on insolvencies would be even more negative.

“Polish economic growth is rebalancing this year, from net exports towards domestic demand. However, external impacts, from the disappointing recovery of the Eurozone and the embargoes implemented by Russia, will contribute to a higher risk of company insolvencies in Poland. Examples of increased corporate risk include the transport sector, which is already suffering from lower demand due to its significant international exposure. Simultaneously, the Russian embargo is not only resulting in a deterioration of the business performance of agro-food exporters, it is also causing downward pressure on domestic market prices – which are already impacted by the good harvest this year”, concludes Grzegorz Sielewicz, Coface Economist for the Central Europe Region. 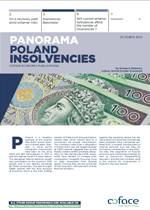 Download this press release : Polish insolvencies stop rising - but for how long? (262.94 kB)