Russia is emerging from recession, but the structural constraints risk impeding its mid-term growth

The diversification of the Russian economy, made necessary by a slump in oil prices that is set to last, is coming up against structural constraints that may well have a deleterious effect on its mid-term growth. Certain sectors (agrifood, chemicals, automotive, etc.) do, however, seem to be benefiting from an upturn in business that will contribute to recovery in 2017.

Major impediments to diversification: a shortage of manpower by 2020 and the lack of investment

After two consecutive years of contraction of economic activity (-2.8% in 2015 and -0.2% in 2016), the 2017 growth forecasts for the Russian economy are once again positive, albeit weak (1%, according to Coface). The vulnerability of its mid-term growth can be traced to its overly-heavy dependence on hydrocarbons. Despite the recent upturn in oil prices, Russia cannot count on this being sustained, nor on strong growth in oil production.

The diversification of the economy, which is part of the strategic plan of the Russian State, is up against various structural obstacles, in particular the demographic development of the country, manifested since 2010 by a drop in the working-age population. Furthermore, the sanctions imposed following the Ukrainian crisis and the failings in matters of governance (regulatory quality, political liberty, corruption) are limiting the nation's appeal for foreign investors. What is more, private Russian capital is not always directed towards the national economy, with certain economic players favouring savings over investments.

Although its structural competitiveness is tending to improve, Russia needs to improve the use of its production facilities and work productivity

When faced with these structural constraints and a difficult context, both national and international, Russia must keep its competitiveness growing: considerable progress has been made in this regard over the last five years (from 67th place in 2012-2013 to 43rd place in 2016-2017[1]).

The evolution of oil prices and the international context (lifting of sanctions) will be decisive for private investment, in decline since 2013, and the upturn of which would enable the production facilities to be improved and expanded.

While the levels of education and scientific research feature among the country's assets, work productivity remains low in Russia (more than seven times less than that of the USA and more than five times less than the EU), and at fairly static levels. The unit cost of labour, nevertheless, is relatively high.

The steep drop in value of the rouble in 2014-2015 has boosted the competitiveness of certain Russian goods compared to imported goods, but mainly in sectors that have enjoyed specific support measures, such as agrifood, chemicals and rubber/plastics, and these could continue to drive growth. Furthermore, after two years of steep decline (-36% in 2015 and -11% in 2016), car sales went up in March and April 2017, heralding a more positive trend for this sector in 2017.

DOWNLOAD THE PUBLICATION Russia – from recession to recovery, but to what extent and how fast? 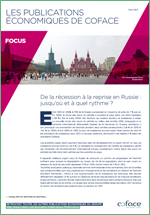 Download this press release : Russia is emerging from recession, but the structural constraints risk... (143.73 kB)


Russia – from recession to recovery, but to what extent and how fast?