The CEE region has become an attractive destination for investments by global car manufacturers. In 2014, 3.6 million vehicles were produced in Eastern Europe, equating to 21% of total EU production. In the CEE countries covered by Coface´s analysis there are 33 car factories, most of which were created by foreign direct investment (FDI) inflows. The analysis shows that despite high dynamics of car sales generated by local clients recently, CEE factories remain highly dependent on foreign demand.

The CEE region has been able to attract FDIs due to its attractive labour costs, geographical proximity to Western Europe, educated workforce and the improving business climate. Co-face´s analysis covers the automotive sector in the CEE countries where significant volumes of cars are produced: the Czech Republic, Hungary, Poland, Romania, Slovakia and Slovenia. With Skoda and Dacia the region has two especially strong local brands that, thanks to high FDIs, have survived in the competitive global market.

The manufacture of vehicles and transport equipment has a measurable effect on the out-come of CEE economies. For some of the region’s countries such as Hungary, the Czech Republic and Slovakia, the sector represents around a tenth of their total output. It also generates a significant number of jobs, employing over 850,000 workers in 2013 in the 6 countries analysed.

“The number of vehicles produced in the CEE region has more than doubled in the last ten years” commented Grzegorz Sielewicz, Coface Economist for CEE. “Slovakia, the Czech Republic and Romania were the most successful, where car production tripled, or even quadrupled. However, it should also be noted that high growth dynamics cannot be endlessly continued, due to eventual saturation of the market.”

Vehicle exports account for a significant share of the CEE´s foreign trade. In Slovakia, for example, they represent 25 % of the country’s total exports. CEE car production is strongly exposed to foreign demand, as the majority is destined for external markets. However the current stance shows that the Eurozone - the main export market - is rebounding and generating improved prospects. Due to these positive trends in the Eurozone and other European countries, the demand for vehicles has been growing.

Although the deterioration of Russian demand is weighing negatively on the sector, this is compensated for by increased demand from other export destinations and CEE domestic sales.

While faced with unclear situations on some external markets, positive developments can be seen on the domestic side. CEE domestic demand is benefiting from better prospects from local households, due to the improved labour market, subdued inflation, low oil prices, rising consumer confidence and attractive interest rates. The higher propensity to spend is resulting in more dynamic car sales in CEE economies. Customers are not only households, but also companies expanding their fleets of passenger cars and commercial vehicles. Commercial vehicles have been generating high sales dynamics due to improved business prospects, such as the Eurozone GDP growth of 1.5% forecast for this year. The increased demand for commercial vehicles is a positive message, especially for Polish manufacturing plants, as significant volumes of light commercial vehicles are produced there.

Nevertheless, this increased domestic spending will not be enough to make the CEE automo-tive sector independent from external demand. Having been so exposed to exports, the risks from deterioration on foreign markets cannot be avoided, although higher domestic growth potential could mitigate these risks. Russia´s minor share within the region´s vehicle exports structure does not significantly impact the sector´s overall performance, especially with im-proved Eurozone prospects.

Increasing sales figures are not equal to car manufacturers’ profitability

Even though the CEE market shows increased car sales figures, these higher volumes do not translate to an equal increase in car manufacturers’ profitability. Many of them are still suffer-ing from overcapacities, clients’ expectations of obtaining sizeable discounts and self-registrations effected by dealers. 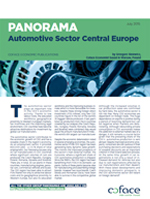