Brazil - No quick fix for the crisis

Brazil has grown over the last decade, as a result of the boom in commodity prices and strong household consumption. The country endured the 2008-2009 crisis, thanks to liquidity injections from public banks. The ratio of total credit to GDP rose significantly during the 6 years from 2008 to 2014, from 39.7 % to 54.7 %. Moreover, benchmark Selic interest rates fell to their historic lowest level, to 7.25 % a.y. in October 2012. This improvement in credit conditions is in perfect synergy with the country’s emerging middle class. However this movement was not followed on the supply side. Industry became increasingly vulnerable to imports, due to the combination of Brazil’s weak infrastructure and high production costs. These weaknesses were particularly associated with the country’s labour force, as salaries increased well above productivity during the period.

The government attempted to contain industry hemorrhaging by temporarily reducing taxes on sensitive sectors. However this succeeded only as a palliative measure and was not enough to boost activity, let alone to encourage investments. Activity has lost rhythm in recent years, as Brazil’s consumption-based growth model reached exhaustion and commodity prices declined. By 2014, it was clear that major changes to the economic model needed to be implemented - notwithstanding the fact that there would be presidential election in October of the same year. GDP growth stood at a meager 0.1 % in 2014, due to repressed inflation (artificially low energy and oil prices) and increasing public expenses (+ 1.3 %).
The year of 2015 began with Dilma Rousseff´s second Presidential term. She won the election, but was faced with a much tougher battle: to control inflation and the marked deterioration in public accounts. As yet, the government has failed to improve macroeconomic fundamentals. In early September, Standard & Poor’s downgraded Brazil to junk status. Coface also reviewed down the country risk assessment, from A4 to B (see table 1). The reasons leading to this decision will be more intensively explored within the first section of this panorama. The second section of this updated sector barometer reveals the effects of the recession, on a sector by sector basis. This information is based on Coface’s examination of the financial performances of companies in different industries, highlighting where risks have increased and where they have remained stable. Unsurprisingly, no segments reported improvements. Three industries - the automotive, construction and steel industries - were downgraded from high risk, to very high risk. 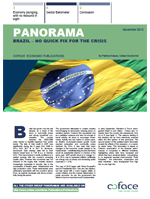