The Ukrainian crisis has occurred in a context of significant weakening of the Russian economy. In 2013, Russian growth fell to 1.3% after an average GDP progression of 4.8% between 2000 and 2011. The slowdown that Russia is experiencing is not excessively different from that observed in the other BRICS. A number of the major emerging countries have recently been characterised by marked deceleration in investment and, to a lesser extent, consumption.

It will be difficult for monetary and fiscal policies to play a counter- cyclical role. First of all, because interest rate policy is  constrained by the announcements of economic policy changes by the Fed, which destabilises the major emerging currencies. But particularly because the slowdown comes from structural deficiencies: problematic infrastructures and particularly a difficult business climate in the case of Russia. On paper from a financial point of view, Russia is in a comfortable situation which may allow it to limit the negative impact of the external shock created by the geopolitical crisis, at least for a certain period of time. The currency reserves are still very high, the current account surplus is maintained and may even increase over 2014, and the public debt is modest. In short, in the face of this dual structural and geopolitical crisis, how can the Russian economy react in the short and medium term and what are the major economic and financial risks? What scenario can we expect for reform and development? 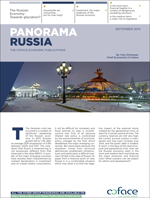