South Africa’s growth performance has been in decline since the global financial crisis. Since peaking in 2011, the growth rate (hit by lower commodity prices and power supply problems) has continued to slow. Although heavy droughts weighed on agriculture in 2015, service activities (such as finance and retail) were dynamic.
Is this situation likely to continue? After shrinking by 0.1% in the first quarter of 2016 compared to a year earlier, gross domestic product only expanded by 0.6% in the second quarter. Growth was mainly dragged down by agriculture and mining. Over the upcoming period, South Africa’s links with China, volatility in the global financial markets, domestic politics and skittish investor-confidence are all factors that could continue to burden the country’s economic performance.
How will the country face these challenges? South Africa does have a number of strong points on its side, notably being the African continent’s second-largest economy. It also benefits from a highly diversified economy and is considered one of the leading countries in terms of manufactur-ing output, despite competitiveness issues caused by high production costs. The country still has challenging times to navigate, as global growth will only experience a slight pick-up, while a significant rebound in commodity prices is not expected. Moreover, shocks could be amplified if the country loses its investment graderating. Although two of the three major ratings agencies retained South Africa’s sovereign rating at investment grade level in late November (Moody’s two steps above junk, at Baa2 and Fitch Ratings one step above, at BBB-), the situation remains risky, with continued economic challenges on the horizon. Coface forecasts that growth will show a weak recovery of 0.8% in 2017, after stagnating at zero growth in 2016.
This panorama will also focus on the automotive and agrofood sectors. Although risk levels are of some concern for these sectors, the automotive industry is continuing to attract major investments from large international players. The agrofood sector could still offer some export opportunities, particularly to the European market. 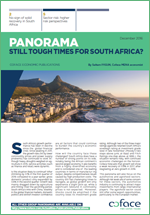 
South Africa’s economy challenged by crises in agriculture and mining, amid fears of an investment downgrade