In the first half of 2018, Coface continues to record a solid performance in a gradually normalising risk environment

- Loss experience progressively normalising, both on frequency and average size of claims

"The economic environment remained favourable in the first half of 2018, allowing us to generate a net profit of €62.8m. We remain nevertheless attentive to the evolution of risks and in particular to the questioning of free trade and its potential consequences on world trade. We therefore anticipate that the second half of the year should see the loss ratio revert close to middle-of-cycle levels.

In addition, during the first half we continued to transform the Group and its culture. We have thus deeply modified the organisation by creating a Business Technology unit, closer to our business lines, and a Transformation Office to lead the change in our organisational practices. We have also launched an ambitious leadership training program for 300 managers."

The Board of Directors of COFACE SA examined the consolidated financial statements at 30 June 2018 at its meeting of 25 July 2018.

They were also previously reviewed by the Audit Committee at its meeting on 24 July  2018.

These interim consolidated financial statements have been subject to limited review by the Statutory auditors.  The limited review report is being issued. 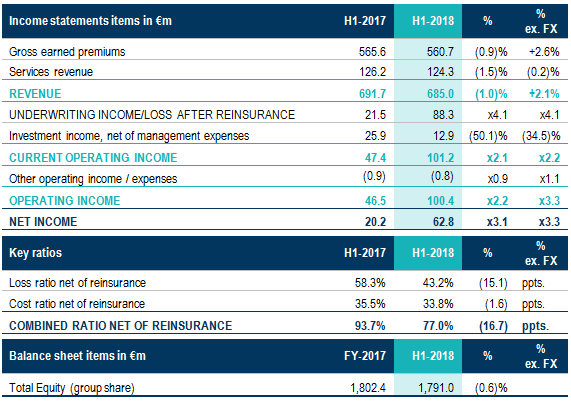 Coface recorded a consolidated turnover of €685.0m in H1-2018, up 2.1% at constant exchange rates compared to H1-2017. On a reported basis (at current exchange rates), turnover decreased by (1.0)% due to the strengthening of the Euro against other currencies in which the Group operates.

In line with previous quarters’ trends, growth in Coface's customer activity had a positive impact of +3.4% over the first half. The decline in prices remained controlled at (1.7)%, reflecting good commercial management in an environment that remains favourable.

The client retention rate is high in all regions and reached a record-high of 93.0% for the Group. New business started the year at a modest €62m, down €12m compared to H1-2017, mainly due to a slow start in the first quarter.

Insurance revenues (including Bonding and Single Risk) increased 2.6% at constant scope and exchange rates compared to H1-2017 (down (0.7)% at current exchange rates), thanks to the return to growth in mature markets, to the growth in our clients' business and to a high level of contract retention. In emerging markets, our contract portfolios are stabilising.

Revenues from other activities (Factoring and Services) were down (2.1)% vs. H1-2017 mainly due to lower factoring revenues in Germany in a context of controlled margins.

In the Northern Europe region, turnover decreased (1.8)% compared to H1-2017 (on a current basis and at constant exchange rates), affected mainly by lower factoring revenues. Credit insurance revenues are stabilised.

In Western Europe, turnover increased by 0.5% and 1.5% at constant exchange rates thanks, on one hand, to our customers' activity and, on the other, to the Group’s record client retention.

In Central and Eastern Europe, turnover grew by 6.9% and 7.8% at constant exchange rates. All countries in the region contributed to this performance, which benefited from growth in insured sales and record retention. Factoring revenues were also up (Poland).

In the Mediterranean and Africa, a region driven by Italy and Spain, turnover rose 5.8% and 7.3% at constant exchange rates, thanks to good commercial momentum and growth in policyholders' business.

In North America, turnover was down (8.1)% as reported but up 1.7% at constant exchange rates. In addition to a strong currency effect, the Group has now stabilised its portfolio. The increase in activity is mainly explained by large contracts.

In emerging markets, performance was mixed. Turnover in the Asia-Pacific region was down (10.4)% on a current basis and down (1.5)% at constant exchange rates. The negative impact of foreign exchange is due to currencies whose exchange rates correlate with those of the US dollar, notably the Hong Kong dollar. Customer activity grew and the region recorded a strong improvement in commercial performance. However, these positive trends were offset by high premium rebates (low claims experience) and low Single Risk sales.

In Latin America, turnover decreased by (20.3)% in current terms and by (6.5)% at constant exchange rates due to premium rebate registration. This decline comes in a context of prudent risk management (currency turbulence), nevertheless it shows a significant improvement compared to Q1-2018.

The Group's provisioning policy remains unchanged. The rigorous management of past claims enabled the Group to record 32.1 points of recoveries over the first half. These levels remain well above the historical average. In particular, they benefited from good recoveries on major claims recorded in previous years. This led the Asia Pacific and North America regions to post particularly low ratios.

Coface continues its operational efficiency programme. Cost savings in the first half amounted to €18m, up €13m from savings achieved in H1-2017. This allows us to confirm the target of total annualised savings of €30m for 2018, which will probably be slightly exceeded.

In addition, Coface continues to reinvest these savings in the Group’s in-depth transformation. Thus, since the beginning of the year, Coface has made disciplined and controlled investments of €15m (up €11m compared to     H1-2017). As a result, the evolution in internal costs is mainly due to the impact of inflation.

The Group's cost ratio net of reinsurance was 33.8% in H1-2018, an improvement of 1.6 points year-on-year.         Q2-2017 suffered a significant tax charge in Italy (€6m one-off). Restated from this adjustment, the net cost ratio improves by 0.3 points. The cost ratio benefited from the growth in turnover but also from the improvement in reinsurance conditions (commissions).

Operating income amounted to €100.4m in the first half, doubling compared to the previous year, mainly due to a lower claims ratio. During the second quarter, operating income benefited from the renegotiation of the lease on Coface’s Bois-Colombes headquarters, which more than offset the loss recorded on the sale of Cofacrédit.

The effective tax rate fell to 32% from 49% in H1-2017 thanks to the return to better fortunes in emerging markets.

In addition, the share buyback program is proceeding according to plan. At the end of June, Coface had bought back 1.7m shares for a total amount of €16.5m.

This change evolution is mainly explained by the positive net result of €62.8 million, more than offset by the dividend payment (€52.9m) and share buybacks (€16.5m).

The annualised return on average shareholders' equity (RoATE) was 7.8% at 30 June 2018, mainly due to the improvement in technical result.

The solvency ratio was 163%[1], above the target range (140% - 160%). Its evolution can be explained by a good control of capital consumption and by a decline in eligible own funds, mainly due to higher reserve risks and lower unrealised gains.

In an economic environment that remains favourable on the short term (global growth estimated at 3.2% in 2018) Coface remains more attentive than ever to rising risks. The political context remains uncertain and the questioning of free trade weighs on growth of world trade. In addition, political (Brexit, protest votes) or sector risks (distribution) remain.

In this context, Coface, strengthened by its investments in risk management, continues its rigorous underwriting policy and confirms its anticipation of a good year 2018. However, the second half of the year should see loss levels to revert to middle-of-cycle range.

This year, Coface continues to implement the Fit to Win strategic plan with the same determination. To this end, the Group is strengthening its leadership programme with training for 300 managers. Its in-depth transformation also involves internal reorganisation including the creation of a Business Technology unit, a Transformation Office and an Innovation department. By adopting this new organisation, Coface strengths its focus on technology and digital in order to improve its operational efficiency and enhance client service.

In terms of savings, the target of €30 million in 2018 will probably be slightly exceeded. In addition, Coface continues to reinvest these savings in the Group’s in-depth transformation. Thus, Coface plans to invest €19 million this year in long-term value creation: initiatives to boost commercial momentum and improve service quality, as well as in the transformation of its digital infrastructure. Coface now anticipates a balanced accounting breakdown of these investments between recurring and exceptional expenses.

In parallel, Coface is continuing work on its partial internal model (Solvency II) and continues to monitor potential regulatory changes that could increase the capital requirement under the standard formula.

Finally, the objectives of delivering a net combined ratio of around 83% over the cycle and achieving a RoATE above 9% are maintained.

The presentation will be available (in English only) on 25 July (after market close) at the following address: 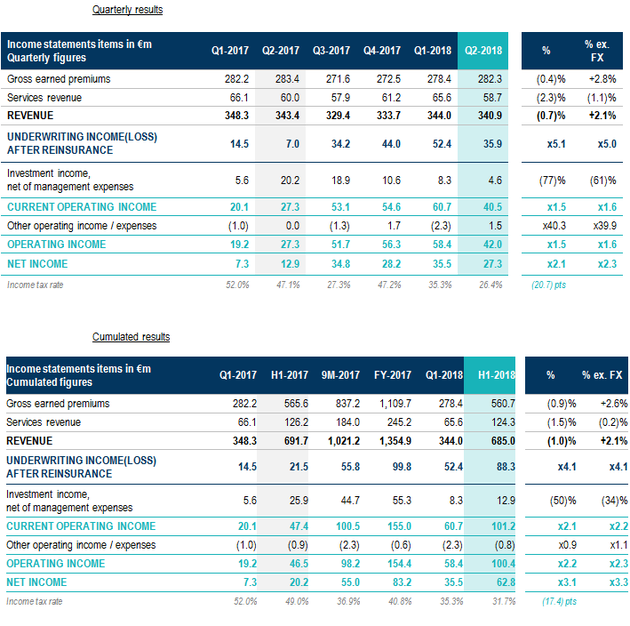