Panorama : Should we be afraid of “low-flation”?

The term "deflation" seems to be on everyone's lips in Europe these days, not just on those of economists.

The buzz around the term is not surprising, as Eurozone inflation has been falling for the past three years. France is no exception: French consumer prices rose by only 0.5% year-on-year in October 2014. This slower pace of inflation coincides, moreover, with sluggish growth. As we know, deflation, when it occurs, has considerable consequences for consumers. Initially, a drop in inflation benefits consumers, as it increases their purchasing power. But, the more marked the fall in prices and the longer the fall continues, the more likely this trend is to send the economy into a lasting recession: from the moment households expect prices to continue to slide tomorrow, they completely lose interest in buying today. In other words, lower prices lead to lower consumption, which in turn triggers another drop in prices. The risk of becoming trapped in this vicious cycle raises several questions: what kind of deflation is one nearest to in France at the moment - a prolonged period of "low-flation" as in Japan in the 1990s and 2000s, or a deep depression as in the 1930s? And what would be the effect of a possible period of deflation on French companies? Are some activity sectors more exposed to this risk than others?

The ECB's proactive policy, the availability of abundant liquidity and also the current structures of the French economy allow the risk of "deep deflation" as in the 1930s to be put into perspective. In contrast, the probability of a prolonged period of "low-flation" as observed in Japan from the 1990s seems stronger, even if the position of the French banking sector today appears better than that of the Japanese banks at the time, and the scale of the French property market excesses would seem smaller than that of Japan. Such a scenario would have negative consequences: “low-flation” combined with sluggish growth for the French economy as a whole, and particularly for the companies in the activity sectors suffering from overcapacities (in particular, industry). But a prolonged period of stagnation would not have only negative effects on businesses. They would benefit from the decline in production costs (notably the one of raw materials) and from lower interest rates. In sum, it signals a change in the pattern of growth: less growth, less inflation, but also more favourable financing conditions and lower production costs for some sectors, as confirmed in 2014, during which the number of company failures stabilised in France, despite growth of only 0.4%. 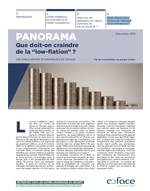 
Press release : “Low-flation” in France, the sign of a change in pace of growth