The execution of the Fit to Win plan continues

Unless otherwise stated, evolutions are expressed by comparison with the results as at30 September 2018.

"Coface recorded yet another strong quarter despite an economic context that has continued to deteriorate in line with our expectations. Our strong performance illustrates the effectiveness of the transformation we have implemented within Coface over the past three years, which has notably resulted in the significant improvement of our risk management processes. Commercial momentum was positive this quarter, as new business is continuing to grow whereas our clients’ activity is slowing down. We are maintaining our selective underwriting policy, which is now bearing fruit in a more volatile environment.

Three years into its implementation, all Fit to Win objectives are in the process of being achieved, or even exceeded. The Coface teams are now actively focused on building the next plan.”

The Board of Directors of COFACE SA examined the consolidated financial statements at 30 September 2019 at its meeting of 23 October 2019.

The Audit Committee at its meeting on 21 October 2019 also previously reviewed them. 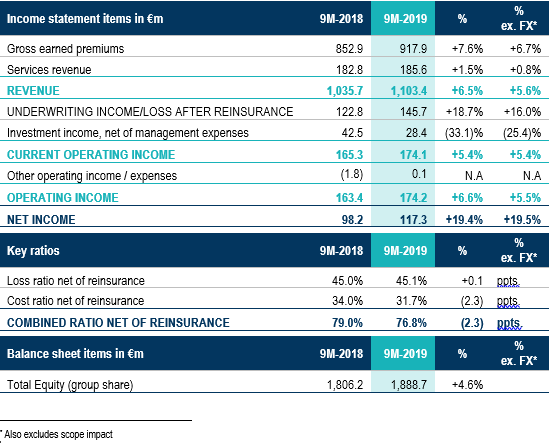 Coface recorded consolidated turnover of €1,103.4m for the first nine months of the year, up +5.6% at constant FX and perimeter compared to 30 September 2018. On a reported basis (at current FX and perimeter), turnover grew by +6.5%. This notably includes the contribution of Coface PKZ during Q3-2019.

Growth in the turnover of Coface's clients had a positive impact of +2.4% over the first nine months of the year. Although still positive, this growth marked a net deceleration in Q3-2019 (+0.3%) compared to previous quarters, in line with the global economic slowdown. Price decreases remain under control, at (1.1%), reflecting good commercial discipline and re-pricing of some specific contracts.

The client retention rate was high in most regions and reached a record high of 92.2% for the Group. New business rose by €6m compared to the first nine months of 2018, to reach a total of €96m. This reflects a policy of controlled underwriting and continued commercial efficiency.

Turnover from insurance activities (including bonding and Single Risk) rose by +6.7%, at constant FX and perimeter, compared to the first nine months of 2018 (up by +7.6% at current FX and perimeter). This was driven by previous growth in client activities and a high level of retention.

Revenues from other activities (factoring and services) grew by +1.5% compared to the first nine months of 2018, despite a slight fall in factoring revenues from Germany.

In the Northern Europe region, revenues grew by +2.0% (on a current basis and at constant exchange rates). Revenues from credit insurance grew by +3.0%, driven by client activity, a good level of client retention and a rise in new business production.

In Western Europe, turnover progressed by +3.1% and by +2.9% at constant rate of exchange. This was due to a record rate of retention for the Group, a return to growth in new business for credit insurance and a good quarter for single risk insurance.

In Central and Eastern Europe, turnover rose by +9.2% and by +2.3% at constant FX and perimeter, mainly due to growth in credit insurance. The increase on a current perimeter basis is explained by the contribution of Coface PKZ, the activity that was integrated during Q2-2019.

In the Mediterranean and Africa, a region driven by Italy and Spain, sales rose by +4.3% and by +4.9% at constant FX. This was supported by a positive sales momentum and strong growth in client activity.

In North America, reported turnover increased by +8.8% on a reported basis and by +2.9% at constant FX. Client retention rates are progressing and are now close to the group average, while new business is growing again. Turnover is, however, impacted by the cancellation of a single risk policy.

Emerging markets are once again reporting high growth rates. Revenues in the Asia-Pacific region rose by +24.0% at current FX and by +18.1% at constant FX. Client activities are continuing to progress and the region showed a strong improvement in commercial performance.

In Latin America, turnover grew by +19.8% at current FX by +32.4% at constant FX. These figures are affected by certain policies which were expressed in international currencies. When this technical effect is removed, growth would be +25.9%, due to the signing of large global contracts.

The Group’s reserving policy remains unchanged. Strict management of past claims enabled the Group to register 34.5 ppts. of recoveries over the nine-month period. These levels remain well above the historical average. During Q3-2019, the group only recorded a few larger claims in North America and Latin America. There is a slight rise in the frequency of claims, even if unit costs are down compared to the previous year.

Coface is continuing its policy of strict cost controls and long-term investments. Costs during Q3-2019 were down by (0.6%) at current FX and by (1.9%) at constant perimeter and FX. This decrease is partially explained by non-recurring items of approximately €2m.

The net reinsurance cost ratio was 31.7% for the nine months, an improvement of 2.3 ppts. year-on-year, thanks to positive operating leverage.

Net financial income for the nine-month period was €28.4m, including €7.3m of net realised capital gains and a positive currency effect of €4.0m. This figure appears lower than the previous year, as it benefited from a positive foreign exchange gain of €18m recorded in Q3-2018. This gain was partially offset by a charge of €10m recorded in the technical accounts.

Despite an environment still marked by historically low interest rates, Coface managed to achieve an almost stable yield on its current portfolio income (excluding capital gains, depreciation and currency effects) of €32.6m (compared to €32.7m for the first nine months of 2018). The accounting yield[**], excluding capital gains, stood at 1.2% in 2019, which is stable compared to the previous year (1.2%).

Operating income for the first nine months of the year was €174.2m, a rise of +6.6% compared to the previous year.

The effective tax rate fell to 28%, down from 35% for the first nine months of 2018. This reflects a return to profitability for regions that were heavily in deficit in the past.

This change is mainly due to positive net income of €117.3m offset by the dividend payment (€119.4m) and positive adjustments to the fair value of investments (€67.1m).

The annualised return on average tangible equity (RoATE) was 9.5% at 30 September 2019.

The third quarter did not bring much clarity on the major uncertainties affecting the global economic environment. The outcome of discussions around Brexit remains uncertain as the 31 October deadline is rapidly approaching. Tensions between the United States and China continue to weigh on the global economy. On a sectorial level, the tourism sector has been marked by some large bankruptcies, while the automotive industry remains under pressure worldwide.

Coface continues to streamline its commercial processes to generate positive commercial momentum, without changing its selective underwriting policy in this context of global economic slowdown.

The Fit to Win plan is coming to an end and its objectives will be met or exceeded. Coface is now working on its next strategic plan. Some of the financial objectives within this new plan will depend on the validation of the partial internal model by the French regulators (ACPR).

Coface’s results for 9M-2019 will be discussed with financial analysts during the conference call on 23 October at 18.00 (Paris time). Dial one of the following numbers: