Significant improvement in all operational and financial indicators

Variations in % expressed in comparison with Q1 2013

“The first quarter 2014 results reflect the relevant of the profitable growth model that we have developed over the past three years.

On the one hand, the significant improvement in our loss ratio confirms the quality of our risk monitoring. On the other hand, a dynamic commercial policy supported by product innovations allows us to offer our customers a range of increasingly efficient services, increase our retention rate, and improve our turnover.

On these solid foundations, Coface fixed medium-term objectives for growth and profitability based on a combined ratio net of reinsurance declined significantly.”

The board of directors of Coface SA examined the summarised consolidated accounts for 1st quarter 2014 at its meeting on 25 April 2014.
The 1st quarter 2014 data underwent a limited review by the statutory auditors. 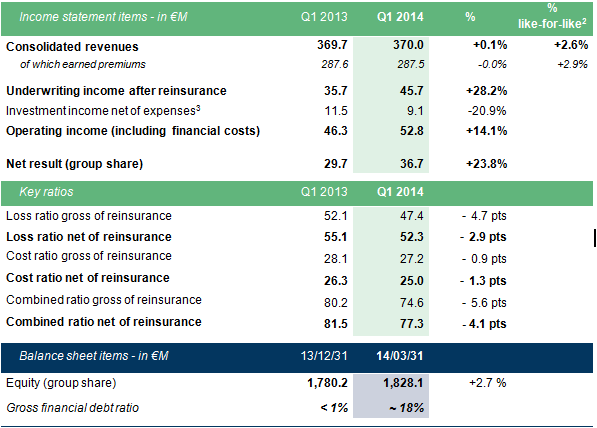 The first quarter business activity confirms the commercial rebound begun in 2013. Coface’sconsolidated revenues totalled €370.0 M and increased by +2.6% on a like-for-like basis2and +0.1% at current scope and exchange rates.

-       our customers’ business activity is picking up, in line with the evolution of the global macroeconomic environment.

This trend confirms the confidence of our customers and the success of the new credit insurance product and service offerings launched in 2013:Coface Dashboardfor large accounts and TopLiner to supplement cover for existing policies as well as the enrichment ofCofanetwith new functionalities.

Since the beginning of the year, Coface has launched several new innovative services that will be available around the world: in March EasyLiner, dedicated to SMEs, and in April CofaServe, which allows Coface services to be integrated within customer information systems.

Excluding exchange rate effects, which had a negative effect on Latin America, Asia/Pacific and Mediterranean & Africa (Turkey),business activity across all regions was good compared with first quarter 2013, reflecting the effects of the commercial recovery seen in 2013.

In first quarter 2014, the effects of the transformation plan were in full swing compared with Q1 2013. Results improved very significantly:

3. Optimisation of the Group’s capital structure

With a low level no debt at the end of 2013 and equity that increased over the past three years, Coface decided to optimise its capital structure by issuing €380 M in subordinated bonds to a diversified base of international investors in March.

The operation, which was ten times oversubscribed, illustrates the confidence in the profitable growth model implemented by Coface on the basis of strengthened operational and financial fundamentals.

Following this issue, Coface decided on 14 April to carry out a distribution of €227 M, including an exceptional distribution of €100 M, after which the Group’s financial debt ratio remained below 20% and the return on equity, net of intangible assets (ROTE)5, increased by 1 point at 10.2% for the first quarter.

Taking these operations into account, the rating agencies Moody’s and Fitch reconfirmed on March 2014 the Group’s IFS6 ratings at A2 and AA- (stable outlook) respectively.

Coface anticipates a sustained global growth this year (+3.1% after +2.6% in 2013). The moderate recovery in the Eurozone combined with the acceleration of growth in the United States, despite a disappointing first quarter, will contribute to this trend. The activity will remain dynamic in most emerging countries.

In this context, Coface intends to take an active part in the development of credit insurance worldwide and pursue its strategy of sustainable and profitable growth based on product innovation and a model of effective multichannel distribution.

This press release is completed by the entire "regulatory information” on the website Coface.com.

[2] The change is calculated on a like-for-like basis. The scope effect of +0.3% is primarily associated with the consolidation of Coface RUS Insurance Company  in September 2013.

[3] Investment income net of expenses and excluding costs of debt.

[4] Excluding relocation costs. Including these costs, the combined ration net of reinsurance stood at 83.5% as of 31 December 2013.[