Corporate insolvencies in France: The rebound that began in May 2018 is expected to continue in 2019

At the end of December, the consequences of disruptions related to the "yellow vest" movement were not very evident on insolvencies. December even saw a decline in insolvencies (-3.6% compared to December 2017). Among the sub-sectors of retail, the main sector with potential exposure, only retail clothing recorded an increase of 22% (15 more insolvencies than in December 2017). The movement seems to have had slight impact in catering (+6%, but slightly better than for the second half of the year as a whole) and the hotel industry (+39%, i.e., 9 more cases), given the small number of insolvencies. However, the effect of the movement on insolvencies should be more noticeable at the beginning of 2019.

For 2019, Coface forecasts a French economic situation penalised by a deteriorating international environment, linked in particular to increasing protectionism and the slowdown of its main partners, and by production and labour supply constraints. French GDP growth will slow to 1.4% (after 1.5% in 2018). In this context, the upward momentum of insolvencies will continue but its magnitude (+1%) will not be sufficient to cancel out the improvements of 2017 and 2018. 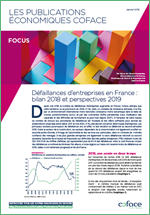