2021 ended with an annual average wage increase of 1.47%, as agreed in collective bargaining agreements. This is the lowest increase since 2017, but also the first time since then that the wage increase agreed in collective bargaining agreements is lower than the average inflation rate for the year: 3.1% in 2021, according to preliminary data from the Spanish Statistical Office INE (Instituto Nacional de Estadística).

However, there are significant sector disparities: although wage increases reached 2.4% in construction and 3.3% in information and communications, hospitality (+0.8%) and industry (+1.2%) saw below -average increases. 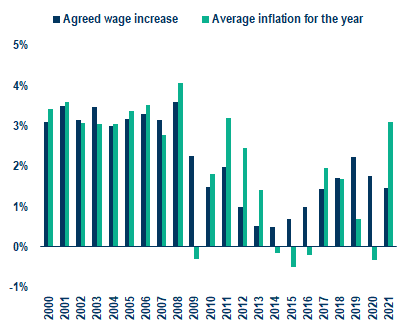 According to data published by Spain’s Ministry of Labour, 94% of workers agreed wage increases below inflation in 2021. On the one hand, this means that a large share of workers will have lost purchasing power in 2021, which will slow down the recovery of household consumption (which was still 7% below its pre-crisis level at the end of September 2021). On the other hand, it also puts a brake on the second-round effects of inflation, which is expected to moderate gradually over the course of 2022. 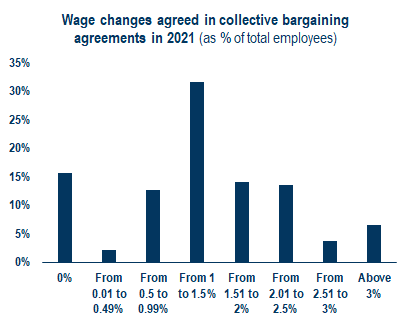