Since the signature of the Pacto por Mexico in December 2012, an agreement struck by the three main political parties, the country has witnessed a variety of reforms. President Peña Nieto was efficient in securing cross-party support and big improvements, were made in 2013. The government obtained approval for a landmark energy reform, bringing to an end the 75-year old monopoly of state-owned Pemex and, by opening the oil and gas industries to private investment, freed up the labor market. It has also introduced competition in the telecoms sector. However sluggish growth was reported in 2013 and during the early part of 2014.

The upturn in the Mexican economy began in the 2nd quarter of 2014 and GDP expanded by 2.1% last year. The pick-up in growth has been partly driven by stronger exports to the United States. Nevertheless, the freefall in oil prices in recent months has raised worries that the energy reform could be impacted, as could the government´s financials. Against this backdrop of headwinds, Coface expects moderate growth ahead (+3.1% in 2015).

In this edition of the Panorama we will discuss the current impact of lower oil prices vs Mexican dependence on oil revenues. The overall current macroeconomic environment will also be presented. Secondly we will assess the outlook for the country´s main sectors. This section includes our Mexican sector barometer, which shows the financial performance of companies in different industries, coupled with Coface´s payment experience. The third section focuses on two major industries, the automotive and steel sectors. 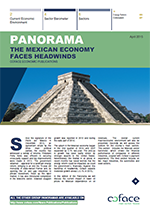